This is just a sample of the many antique boring & drilling related tools we have sold.
Click link to see other Sales Archive Pages on this Site.

Our current offering ofAntiques for sale are at our sister Website Patented-Antiques.com.

1875 Phillips Patent Beam Boring Machine  At first glance this unusual boring machine looks like a Millers Falls boring machine with its distinctive steel rods for the tilting feature.  It is not.   It is an earlier 1875 Phillips patent that is usually seen with a wooden frame.  This example is unmarked and was identified by main design features of the boring mechanism.  The patent shows it with the wooden frame.  I am not sure where this boring machine using steel rods for its tilting design fits into the scheme of things in relation to Millers Falls and the steel rods they used for their tilt feature on their line of boring machines.  I can imagine a few different explanations.

The most distinctive feature of this machines design after the steel rod tilt feature is its spiral screw drive and depth stop collar.  It is an interesting design with an automatic reversing feature that is activated once it hits the pre-determined depth the collar was set to.

It is all operational and pretty much damage free, noting a bit of rot on one of the base legs.  All screws and moving parts are good.  There is not a lot of play or slop in the main gearing or bearings.  In cleaning it up I had to cut it off of the original base and replace a few of the mounting bolts that were beyond saving.

A new and different one for the antique tool collector, timber framer, or other user!!

1875 Phillips Patent Beam Boring Machine  This 1875 Phillips patent boring machine is in nice condition.  This example is marked with the patent info on the head.  The cast iron tilting feature is undamaged.  The handles are nice, and it all seems to work as designed.  It has a reversing feature that works as well. There is not a lot of play or slop in the main gearing or bearings.

A nice piece for the antique tool or drill collector, timber framer, off grid sort, or other user!!

Heavy Duty Beam Drill  This is a pretty nice example that with a little cleaning and oiling will make for a great user or a welcome addition to the collection.  Note the heavy duty cast iron side supports that allow this model to drill angled holes.  I have seen lots of other versions of these where this feature was under designed and one side or the other was broken and damaged.  Not the case here.  The wood is OK, but a bit dry and will look great after a treatment.  There is little to no slop in the head or gearing.  A nice piece that will make a great user.

Ajax Beam Boring Machine / Drill  This Ajax Boring Machine looks to be in OK condition.  I see no cracks or breaks. It goes up and down and round and round.  It looks to me to be reversible for a different speed perhaps, or able to use it through the top?  There is a wedge lock depth stop  still on the side rail.  The adjustable handles are a nice touch as is the tilting feature.  There is not a lot of slop or wear.  I believe it will make a good user.   4 large bits shown in the last pics are also included in the price..

Primitive Bench Drill w/ Flyball Governor   This is a pretty rare & unusual drilling tool.  It is unmarked as to maker, but given the casting seems to be a manufactured thing.  I believe it is European. You see drills with flywheels to help keep things going, but this design is different.   One usually thinks of a flyball governor acting as a speed control on things like steam engines, one lung motors, or that sort of thing.  In this case it seems to act as an automatic feed where the faster or harder you crank, the more downward pressure is applied to the drill point as the upward and outward movement of the balls happens.  Incredibly There is a YouTube video of a fellow running a larger drill with the same design that can be viewed online.   A must have for the collection of drilling tools.   Nice!! 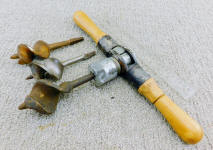 Millers Falls No 4 Ratcheting T / Corner Handle Barn Auger    Wood handles can be set in T position or L / corner.  It is in like new little used condition.  Included are  the 3 Greenlee stubby bits - a 28 - 32 - 40.  I imagine those numbers represent 16ths.  Two still have wax on them.   Very Nice!

Russell Jennings Auger Bits in 3 Tier Box  An early set of 13 by 16ths up to 1".  It is their #100 double thread which is the bit design of choice by most users.  This set looks to have seen little use and all still look good w/ good lead screws and spurs.  I oiled and waxed the outer box.  Nice!! 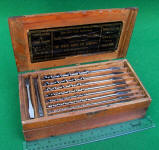 Irwin Auger Bits in Box   This set looks to be complete and pretty nice.

13 Piece Stanley Russell Jennings Auger Drill Bit Set  This set is near mint and all but one is still in its original wrapper.  That one out of the wrapper looks to have seen little use.  This 12 piece set in a 3 tier box is becoming increasingly harder to find.  Different and  Nice.

9 Piece Russell Jennings Auger Drill Bit Set  This set looks to have seen little use.  There may be a couple of replaced ones, but they are proper.  You usually see these as a 13 piece set in a 3 tier box, but this is a proper 9 piece set as can be seen by reading the label.  I have never seen this configuration before.  Different, early and  Nice.

Early Russell Irwin Bit Roll   This is a rare thing.  it is only the second one I have ever seen.  The bits are a mixed up selection of odd & unusual .

13 Piece Russell Jennings Auger Drill Bit Set  This is a very nice early set of auger bits by Russell Jennings the most famous and well respected maker of Brace bits.  Most appear to be unused and there is even original wrap paper on a few.  The owner has inserted one additional small one making this a 14 pc set

Russell Jennings / Stanley 100 13 Piece # 32 1/2  Auger Bit Set  The pictures pretty much tell the story here.  This set is unused and mint.  The oily waxed wrappers are still in place and have done their job.  There is not rust or pitting, just oily waxed paper.  Even the outer cardboard box is original.    This set is unused and MINT.  Different!

Russell Jennings / Stanley 100 13 Piece # 32 1/2  Auger Bit Set  This set looks to be in nice condition, but at least one is marked England, and the rest Australia.  The original 1/4 inch was damaged and replaced.  It has the same Stanley 100 / Russell Jennings mark as the rest.  The rest pretty much look unused.   Different!

Millers Falls #210 2 Speed Bench Drill  The Millers Falls #210 bench Drill is is a well made, heavy duty, general purpose, 2 speed clamp on bench drill. This example has seen little use, operates very smoothly and will make for a great user.  Ready to go back to work. 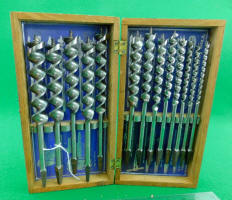 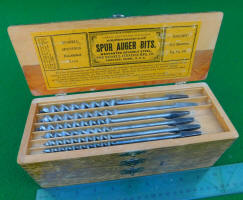 Russell Jennings Auger Bits in 3 Tier Box  An early set of 13 by 16ths up to 1".  It is their #100 double thread which is the bit design of choice by most users.  This set looks to have seen little use and all still look good w/ good lead screws and spurs.   Nice!!


BACK to Tool Archive

This is just a sample of the many antique Tools we have sold.
Click link to see other Sales Archive Pages on this Site.

We can help you sell quality Antique Tools  Contact Us.