This is just a sample of the many antique tools we have sold.
Click link to see other Sales Archive Pages on this Site.

Our current offering ofAntiques for sale are at our sister Website Patented-Antiques.com.

J. Rabone & Sons / Keuffel & Esser 2' 4 Fold Ivory Architects Rule (86 1/2)  This English made Rabone Ivory rule dates from near the turn of the century and is configured similar to a Stanley 86 1/2 Architects Rule with its inside legs being beveled.  The outside scales are in inches and graduated in 8ths, 10ths, 12ths, and 16ths.  There are more scales on the inside ranging from 1/16 - 1'  to 1 1/2 - 1'    It is white, and the name and number stamps are clear.  Double marked rules made for this famous maker of Surveying instruments are much harder to find than the Stanley version  A rare thing in very nice condition. E.P. Johnson #46 Caliper Rule  & Protractor  This rule is made of German Silver.  It was granted a patent in 1907.  The condition is excellent.

Folding Boxwood Tailor Rule  This unusual folding rule is unmarked.  One side is marked off from the inside, and the other from the outside.  Different and Nice! 2 Antique 1' 2 Fold Boxwood Caliper Rules  Both are in excellent condition.  Both are the equivalent of a Stanley #32.  The top one is marked H. Chapins & Son #32.  The bottom one is marked #72 The Chapin Stephens Co.  Nice!!

Stanley # 94 Carriage Makers 4' 4 Fold Rule This was Stanley's largest and longest folding rule.  Usually found all beat up.  This is real Nice!

Cowgill's Patent Angle Divider / Bevel Attachment on Stanley # 54 Rule This unusual rule attachment was patented on May 5, 1891. The patent # 451810 and comes up with a Google search.  It is discussed in Walters price guide ANTIQUE & COLLECTIBLE STANLEY TOOLS A GUIDE TO IDENTITY AND VALUE on pages 527 - 528  This is an early version marked Pat Apld For.  Cowgill the inventor / maker bought Stanley 54 rules and attached his idea to them.  It is a rare thing.  The idea was later incorporated into the Stanley line as the #30 - 31 Angle Dividers.   Pretty Nice!

W. H. Harling 6" Ivory Rule / Protractor for Architects / Navigation  This English rule is configured similar to a Architects Rule with numerous scales and a protractor on the perimeter.  I have read the scales are navigation related.  Rules like this are usually found in boxed drafting sets, or traveling Shagreen cases associated with navigation or architects.   It is marked with the maker name and location on one face.  The overall condition is very nice.

6" Ivory Parallel Rule for Architects / Navigation by Thornton ltd.  This English made Ivory Parallel Rule is in fine condition.  Rules like this are usually found in boxed drafting sets, or traveling Shagreen cases associated with navigation or architects.   It is marked with the maker name and location on one face.

Stanley Rule & Level Co. # 86 1/2  2' 4 Fold Ivory Architects Ruler  One of Stanley's most sought after and interesting ivory rules with its inner beveled inside legs w/ drafting scales.  The overall condition of this near 100 year old ivory architects rule is nice noting some typical yellowing and one leg has a slight bow.  The pins are missing but it closes pretty well, and looks good overall.  These rules were produced from 1884 thru 1917 and then dropped from the Stanley line.  Nice.

Stephens & Co. # 36 Architects Inclinometer Rule w/ Bevel  This unusual Architects rule is marked 36 along with the location of Riverton CT.  The scales are U. S. Standard.  Pretty Nice!

John Roebling Wire Rope Advertising Rule  This unusual rule was made to advertise Roebling products.  Other rules will have actual increments instead of all the blurbs / advertising attesting to how good a product they had.   Rare, Unusual, and Different!!

Stanley # 82 2' 4 Fold Boxwood Rule w/ Board Scales  This is a hard to find rule with lumber scales on the inside. (see pics).  Stanley stopped making them in 1917.  It has seen use, but is overall very nice.

# 32 Boxwood Rule in Leather Case  The rule is near mint.  It obviously spent its life in this leather case.  It is unmarked as to maker, but has Stanley attributes.  Nice!!

D. B. & S. / Darling Brown & Sharpe Miniature Presentation Caliper  The condition is very nice.  The D B S name and location are stamped into the bar.  I am sure these have a story to tell. Who, why, when, where and other questions are all out there with no real answers.   Were they given out to managers at retirement, or something else?  It must have been kind of a rare occurrence as I have never seen another one like this plated and engraved with initials.  Very nice!!

A fine addition to the early Machinist tool collection.

Bamboo Gadget Cane w/ Horse Measure Rule & Level  This unusual gadget cane is unmarked as to maker.   These canes were designed to be used by country gentleman at auctions or other horse selling venues of the day to determine the size and stature of prospective horses being offered up for sale.  To use one would simply push up on the tab, extend the rule upward out of the body,  flip out the cross rule w/ level in it, and slide it over the patiently waiting horse's back to determine how many hands tall he was.  I suppose he would also scratch the horse's back a bit to placate him as he was performing this trick, and reading if the level vial at the same time.  There is a reason such things are called gadget canes.

The overall condition is nice with no splits in the body, or other major problems.

Stanley Rule & Level Co. #38 Ivory Rule The tag on this one indicates it was bought from Bob Kaune in 1975.  Seems like yesterday.

J. Rabone & Sons / Maker  2' 4 Fold Ivory Architects / Engineers Rule w/ Routledge Scales   This rare & unusual 2' 4 fold Rabone Ivory rule is in very nice condition. It is inscribed on the top hinge Perry Brown Worcester with the date 1889 incorporated into the top hinge.  I am not sure if that location refers to Worcester Mass or a place in England, or if this was a presentation piece or specially inscribed for other reasons.

The rule appears to have spent its life inside the protective case and is in exceptional condition.  It shows no wear to the scales or charts on the outside or inside.  It has developed a nice even coloring tone that is very nice.  There are just a couple dirt spots on the inside that will clean if desired.

The outside of the rule is marked J. Routledge / Engineer.  The layout and info given is similar to that found on other engineers rules or "Iron Monger"  rules by Coggeshall. On the left side are charts having to do with Squares, Cylinders, and Globes for given materials including Gold, Silver, "Old Wine", Water, Mercury, Brass, Copper, Lead, Wt. Iron, Cast Iron, & Tin.  The charts on the right bottom side include info for Steel, Coal, F. Stone, Polygons with from 5 to 12 sides as well as a chart with info about Pumping Engines.   Above that  on the top leg is a Routledge logarithmic slide rule with the scales A, B, C, & D.   This is a very unusual feature in an Ivory or other rule.

The inside is set up like a Architects rule with beveled scales to the inside edge.  They are scaled to 1/8" =1' to 1' = 1'.   The main 2' scales are laid out in 8ths, 10ths, 12ths, and 16ths,   The thin edges are also scaled.  The top main hinge has a protractor on the inside face and the name and date inscription on the outside.   This is a super rule in super condition that only is found very seldom, and even more so in this condition.  Highly Recommended!!

Flossie Greenleaf Walking Wheel Log Caliper & Wheeled Rule   Log Calipers are a large and very graphic piece of Americana & American ingenuity. They were a tool that lumbermen of the Northeast used routinely in the field or at the mill to determine how much lumber the lumber mill could expect to get out of a downed tree.  The idea was that you walked the length and kept track of the rotation count of the wheel to determine the length of the tree.  You took this number and after determining the width computed out the bd. ft. volume you could expect after milling said tree using the charts on the sides of the stick or caliper.  There were a couple of different formulas available for this computation, and as can be expected, there was one that favored the buyer, and another the the sellers preferred.   Flossie Greenleaf a woman learned the trade from her father and was a well known and respected maker of rules and log calipers in New Hampshire.  The condition of the top one is super with just minor losses to the yellow wash finish.  One spoke on the wheel is an early replacement, but this is typical and was very well done.  A super piece.   The lower stick with a wheel is in very nice condition as well.  It is unmarked as to maker, but is of the same general time frame and quality of construction.

W. Elliot English 4 Fold 3 Foot Folding Rule   This English Ivory Rule is in super nice condition.  It has scales on every available surface and edge, and shows little if any signs of use or abuse.  It has aged to a mellow white with some light yellowing on the outside legs.  A hard to find size ivory rule in hard to find condition.  A nice addition to any collection.

Lufkin Rule w/ Patent Pending Bevel Guide    I have seen and know of a few other versions of these add on gizmos for wooden rules.  This one is marked Thomas Mitre Rule & Patent Pend.

# 863 L Lufkin Rule / Level & Protractor A very nice rule.  It is like new, straight, and an earlier American made model.  Very nice.

Stanley # 86 1/2 Ivory Architects Rule This is a very nice 2' 4 fold ivory rule.  It is straight and has its pins. The increment are not worn, and the edges are still square and crisp.  It has a nice mellow yellow patina / hue both inside and out.  This is a very nice example of a very hard to find ivory architects rule with its inside being beveled down for use with drawings.  They rarely turn up in this condition any more.

Rabone # 86 1/2 Ivory Architects Rule This is a very nice 2' 4 fold ivory rule.  It is straight and has its pins. The increment are not worn, and the edges are still square and crisp.  It is much whiter than typically seen.  This is a very nice example of a very hard to find ivory architects rule with its inside being beveled down for use with drawings.  They rarely turn up in this condition any more. 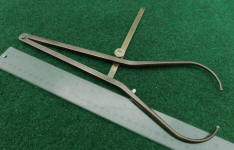 Brass Cranial / Phrenology Calipers w/ Metric Rule by Gilliland - Oakland California  This medical instrument looks to be late 19th / early 20th century.  It is well made and in fine condition. The increments are metric, and the name / location are stamped on one leg.   I could not make anything relevant come up Goggling the Gilliland name along with medical, caliper, or other words.    A rare thing in very nice condition.

BACK to Tool Archive

This is just a sample of the many antiques & collectibles we have sold.
Click link to see other Sales Archive Pages on this Site.