This is just a sample of the many farm related antiques we have sold.
Click link to see other Past Sales Archive Pages on this Site.

Hawley Patent Bench Mount Corn Sheller  This is a pretty rare corn sheller.  Several variations are pictured in Jim Moffet's book on corn shellers.  You need to order the book to see those.  Very little info or other examples turn up with a Google search.   Patented by James Hawley of Odin Ill. and produced in Ohio.  It is marked Goble Bros  & Co. Sole Manf, Ohio.  This example was found in OR, came down to CA for a while, was sold to a "collector" in IN, and was then resold in Chupp's auction shortly after.

Wilson's 1875 Patent Hand Held Pop Corn Size Corn Sheller   This is a pretty hard to find hand held popcorn size corn sheller that was patented in 1875 by a Mr. James Wilson from Nashua New Hampshire.  This version is not marked with the patent info and just says Pat Applied for ---- Nashua NH and must be an early model.   Popcorn shellers are much rarer than then their larger cousins like the Grey Brothers which looks similar or other hand held shellers.    Nice!!

Back to the pretty hard to find part of the story.  I almost left this behind at the collector's house going through different boxes they had on the shelves.  The box this sheller was in had been packed some 20 years ago and had more rat nest and droppings / guano than the kitchen misc that the box said was in it.  Next stop for that box and contents was the dumpster if I had not continued digging.  I do not think many others would have gone through this box, but it speaks to the notion treasure is where you find it.  You just need to keep looking.

The pics of this look horrible, but it is actually in very nice condition. 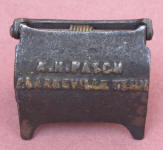 In general hand held pop corn shellers are found much less often simply because so few designs exist, but also because demand for this type of sheller was lower than shellers used for feed or seed and so fewer were made. Corn Shellers were generally for either feed, or for seed stock for the following year, and Pop corn was just a tiny part of the picture, and so few shellers aimed exclusively at it were produced.

There are about a dozen or so different "clam shell" shellers known. Most if not all are pictured in Jim Moffet's new book "The Hand Held Corn Sheller" that has just been published this year. In that book only this and the sheller patented by Wilson in 1875 and known as the Nashua, are identified as pop corn shellers. They are similar in design, but have differences as well. I had and sold the Wilson from Nashua some time back, and you can see that one on our other site in the sales archives.

In the lead to the chapter on this style of corn sheller Jim Moffet states that the patent for this one has not been found, and that just a few are known. An opportunity not to be missed!!

Primitive Wooden Corn Sheller Here is a super hard to find example of a very unusual corn sheller.  It is amazing how many different variations of these that turn up.  At first sight one would think that this was a homemade crude version, or something else altogether, but as I have seen a few others exactly like it, and have spoken to an authority about it so I know that this was a manufactured piece.  It must have been used solely for feed purposes as one would have little control over what was happening when you got to using it.  With the original red wash paint, and great form, this interesting piece of farm history has great appeal not only as a wild corn sheller, but also as a great piece of folk art or early innovative design.

The .50 Cent Corn Sheller   Here is a rare and desirable version of a cast iron hand-held corn sheller that dates from the last quarter of the 19th century.  This style sheller was used to separate seed corn from the cob to be used for next year's crop.  The larger table mount or box shellers that you often see were typically used for feed purposes, while these hand held versions had the much more important job on the early farmstead of giving the farmer more control so that only the choicest kernels were saved for seed stock for following year.  There are many different varieties of these hand shellers available and all of them are becoming increasingly difficult to find.   The idea with this one was that you squeezed the handle more or less as the cob changed size, thus enabling you to pick and choose which kernels you saved into the seed bucket for next years use.  In addition to the info cast into the outside of the jaws, there is the additional info on the inside giving the maker's name as Fisher, and Canton, Ohio as the location where they were made or first invented or patented.  This one is without a doubt one of the most graphic and interesting designs for an antique corn sheller and will make a great addition to the collection.  The condition is super, and this piece still retains a good deal of its original black finish.

Grey Brothers Hand Held Corn Sheller    This hand-held corn sheller is a  hard to find model.  It is NOS and has not been painted or restored in any way.  The leathers to hold it with have fallen apart since I bought it they were so brittle and old.  It is a squeeze type and the hinges which are often broken are just fine.  There is plenty of the original finish left, and the cast in info with the name and patents are clear and strong.

The Peerless Corn Sheller  This super sheller is in such great condition that one would assume that it must have been restored, but I am not sure.  There is no evidence of wear or use, and the paint is so exact that it is scary.  Look at the condition of the handle!!  Usually I buy these things on the east coast right out of the barn, or from a dealer at a show back there, but I got this one here in California, and the guy hardly knew what it was.   In any case it looks great and I really think it is NOS or it may be restored, but in either case it is a good one and you will not have to do anything further to it that is for sure.

The Family Corn Sheller Its rusty and a bit corroded, but that is the way the good old ones usually come.  It is very graphic, completely operational, and one of the most interesting designs for one of these that is available.  There is a new book out on these if you need the patent info, and there is a corn club in Illinois where they are coveted, or just be a closet collector, and acquire it for it historical value and intrinsic importance in the story of how our country grew up and fed itself in the last century.  It displays nicely, and looks great.


BACK to Patent Models / Salesman Sample

This is just a sample of the many farm related antiques we have sold.
Click link to see other Sales Archive Pages on this Site.