This is just a sample of the many antique Boot Jacks we have sold.
Click link to see other Sales Archive Pages on this Site.

Signed Cast Iron Boot Jack with Heart Design   This early cast iron bootjack has the initials L P tastefully cast into the design.  There is also a cut out heart in the fantail.  Overall the casting and the design are super!

Antique Cast Iron Boot Jack   This early cast iron bootjack has a cast out heart in the middle.  Another nice piece of Americana! 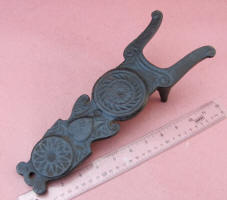 Antique Cast Iron Boot Jack   This early cast iron bootjack has an interesting design with what we are going to call the Circles of Life with a heart in the middle.  Get up every morning, go to bed every night.  Boots on, boots off, day in day out.   Great look, design, and character! 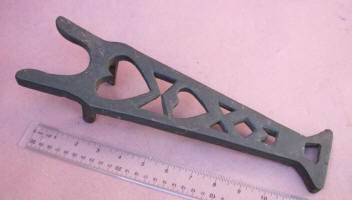 Antique Cast Iron Boot Jack with Heart   This early cast iron bootjack has a large heart cast into the design at the end.  A nice looking piece of early American cast iron!

Antique Cast Iron Boot Jack with Heart   This bootjack utilizes the heart motif within the fantail bottom.  The heel grabber portion is a great curvilinear form.

Antique Cast Iron Heart Motif Boot Jack with Early Repair   This bootjack has a heart motif within the bottom portion.  It looks to have broken along the way right at the neck and an early repair was done with a forged piece of formed steel that was riveted and pined to the original casting.  Great character!

"Naughty Nellie" Cast Iron Boot Jack     This Nellie bootjack is kind of cute with a sweet expression and different hairdo.  Compared to the rest she is actually pretty modest. 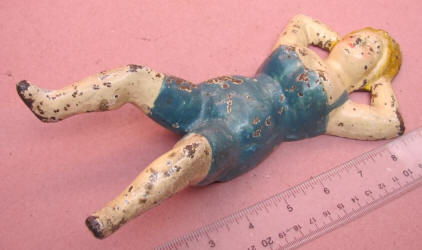 Iridescent Cast Iron Beetle / Cricket Boot Jack    This cast iron Beetle boot jack has great detail in the super fine casting and a finish that is almost electric.  I am not sure what it is, but we are going to call this the Lightning Bug.  A beautiful piece! 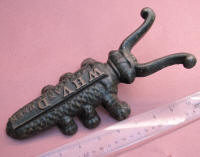 Cast Iron Beetle / Cricket Boot Jack with Advertising    This is a good looking boot jack.  It's marked W H Van Dusen, which I imagine was the name of a shoe store or shoe manufacturer looking to remind you where to buy your next pair of boots each time you take the old ones on and off.  The casting and condition are super!

"Blond Nellie" Cast Iron Boot Jack     This one is kinda cute.  She has everything a fellow could want.

Antique Folding Boot Jack  This is a triple-folder.  The patent info is cast into the cover.  It's nice and compact, but I'd bet your boots to mine that the delicate casting meant not too many have survived.

Victorian Decorated Cast Iron Boot Jack   Here is an antique cast iron boot jack with a great looking decoration much like Victorian hardware. Note that it is a double ender for different size boots.  Also note the reinforcing cast into the base on the underside.  A quality piece obviously made by a quality outfit from the Victorian era---Charles Parker perhaps, or some other well known and respected maker of cast iron products from the 19th century.  The "Beetle" form bootjack may be common, but this stylized version with decoration that resembles Victorian Hardware is anything but and displays a quality of casting not often seen.  Different and very nice!

Antique Double End Cast Iron Boot Jack   This too looks to be English.  It has a boot puller at each end, a somewhat unusual feature.  The casting depicts a Roman looking warrior with headgear on.  Different!

Antique Cast Iron Floral Design Boot Jack   This bootjack has a lot of decoration cast into the top.  I assume the hole in the tail is for hanging it up.  Most boot jacks, but not all have this feature.  Great character.

Patented Mechanical Antique Boot Jack  This interesting cast iron must have been designed to be used in a place where boots were  tough to get off or were very dirty, and you needed all the help you could get without getting dirty or tired.   It has a nice casting, and is in  nice condition!

Twisted Snakes Figural Brass Boot Jack  This cast brass bootjack has an interesting figural theme of two twisted or intertwined snakes.  The two holes between the bodies have the interesting feature of sawtooth-like teeth, much like a corn sheller might have.  This bootjack came out of a farm / engine show in Iowa about 15 years ago and has been in this collection since then.  It is a nice casting and has good detail.  Is it a combo tool corn sheller or isn't it?

Figural Brass Boot Jack / Vines & Leaves  This cast brass bootjack is the same design as the one above but polished rather than painted.  Note the markings on the bottom.  Looks like A. B. Seebass and Offenbach, an outfit I have never heard of.   It is a nice casting and has good detail.  A beautiful piece! 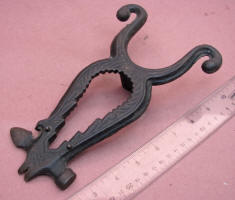 Antique Cast Iron Boot Jack / Combo Tool / Can Opener /  Wrench / Nail Puller / Corn Sheller?  This is a very unusual form for a bootjack.  A combo tools that incorporates a wrench, can opener, hammer, tack puller and what could well be used as a corn sheller in the center cutout portion.  It might just be part of the wrench idea, but those graduated steps sure look similar to some early hand held corn shellers I have seen. 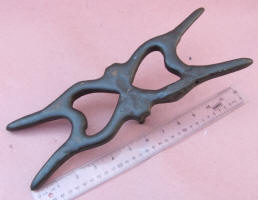 Primitive Cast Iron Heart Motif Boot Jack   This early double end cast iron bootjack has an interesting design with a different size jack at each end, and the pivot in the middle.    It has a very primitive look to it and has great character.

"Naughty Nellie" Cast Iron Boot Jack   Here she is again with her special red outfit on that includes polka dot garters.  Ready to be put into use.

"Nipple Nellie" Cast Iron Boot Jack     This Nellie bootjack has a one piece outfit on pulled down just enough to reveal a bit of nipple.  The paint is worn, but she is not.  Nice form, nice detail, and nice -----. 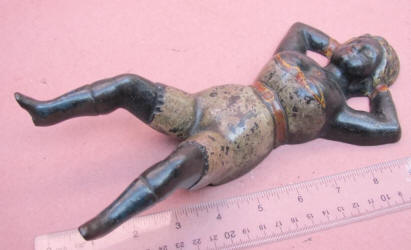 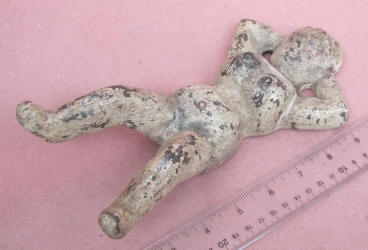 "Nasty Nellie" Cast Iron Boot Jack   Nellie removed all her clothes before posing for this boot jack.  It is a kind of crude casting, and there is not a lot of detail, but it is all there and she is anatomically correct for all  the world to see.  The back looks like a poor casting with signs of sand, but perhaps that was by design to show where Nellie here use to work.  As to age, I guarantee she is older than me, and I am pretty old. 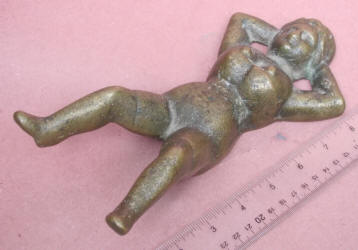 Naughty / Nasty Nellie Cast Brass Boot Jack    This cast brass example would more correctly be called a "Nasty Nellie" than just Naughty.  Her upper body is a bit more exposed than typical and I guess you could say she is anatomically correct.  It appears she still has her pants on though as there is no belly button and no private parts to be seen.  That will come later! 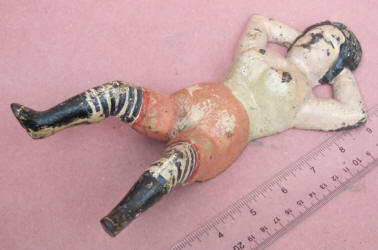 Naughty Nellie Cast Iron Boot Jack     This Nellie boot jack is dressed in what could be considered prison garb or creative lingerie with the stripped outfit she has on. She is a bit chunky for my taste.  Different! 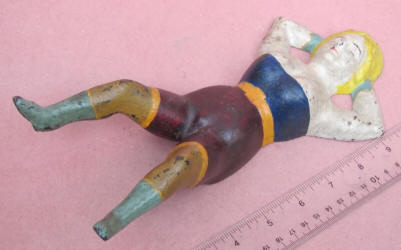 Naughty Nellie Cast Iron Boot Jack   This example has a great look and great original paint job.  We have close to 25 different Nellies to list.  All are vintage and not to be confused with the current versions being offered on eBay and elsewhere.

Cast Iron Patented / Mechanical Boot Jack   This example is in super nice condition.  Put the heel of one foot in the end and step on the foot behind and it would grab the heel of your boot so you could pull it off.  Hopefully it was not after a couple of beers and that you could still do the toe-to-toe walk.  A super nice piece!

Cast Iron Patented Combination  Shoe Shine Stand / Boot Jack  This cast iron combination bootjack / shoe shine stand is a great design..  This one must have been expensive to produce and appealed to just a limited clientele.  I bet not many were made.  Have you ever seen another?

Cast Iron Boot Jack  This cast iron bootjack is very nice.    Have you ever seen another?

Antique Mechanical Twister Boot Jack   This bootjack is in super nice condition. I see no patent or other info, but it dates from the late 20th century if not earlier.  It has a great twisting action to operate it.  These tall mechanical ones are kind of hard to photograph full view, so be sure to click on the pic to enlarge the thumbnail image, and click on all the other links to see all the detailed close-up views as well.

Rare Mechanical Cast Iron Beetle / Cricket Boot Jack    This is a very rare and super nice condition boot jack.  This mechanical boot jack with a wooden arm and toe holder is a hard to find variation of the beetle boot jack.  The beetle is a common theme for a boot jack but this is a rare and seldom found variation  There is patent info and a date on the toe portion, but it is hard to make out in the pictures.  Not one you are likely to see offered for sale again.  Very unusual and highly recommended!

Antique Mechanical Boot Jack  This antique mechanical bootjack is in super nice condition.  I do not see any patent info, but it is a well done, and obviously a manufactured piece.  The overall quality is super.  Rare and desirable!!!

Patented "STAR" Cast Iron Boot Jack w/ Boot Cleaner   Here is a very rare, and very graphic, boot jack and boot cleaner all in one.  It has several different size heel openings, and the cleaning brush is in near new condition.  The name and patent info is cast into the circular base.  This is a great bootjack that I have only seen one other example of in over 20 years of looking.  Highly recommend!

Cast Iron Folding Pistol "The Bull Dog Boot Jack"  This is a clever idea for a folding bootjack.  The casting is outstanding. 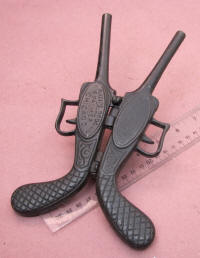 "Phelps, Dodge & Palmer" Figural Folding Pistol Bootjack  This is another neat variation of a folding cast iron bootjack.  Phelps, Dodge & Palmer was a Chicago shoe wholesaler that began operations in 1864.  This would have been a great marketing idea---make it easy for the customer to get his boots off and maybe you could sell him on a new pair.

Cast Iron Figural Folding Pistol Bootjack  This bootjack has advertising for a shoe store in Philadelphia. It like all the others offered here is legit, and vintage, not like those found on eBay or in the local shop.

Patented Mechanical "Star" Boot Jack   This bootjack is in  nice condition.  It represents another better idea that was granted a patent, but was probably found to be lacking in practicality by the general public, and was a short lived entry into the market before the maker / manufacturer just fold up and closed their doors.

This is just a sample of the many antiques & collectibles we have sold.
Click link to see other Sales Archive Pages on this Site.