This is just a sample of the many antique Stanley planes we have sold.
Click link to see other Sales Archive Pages on this Site.

We Buy Quality Antique Tools
Contact Us at AntiqBuyer@gmail.com

Special Note Concerning Prices Seen Below:
Most prices seen reflect actual sale results from this website.
Prices seen span a long period of time and may not reflect current values.  Some are selling for more, many now sell for less.
On some pieces you will see no price, or a price range, with or without an explanation.  The reasons for that are discussed on the FAQ page.

Stanley No. 90 Bullnose Rabbet Plane  NOS in box. USA made. Minty nice and appears to have never been used.

Stanley 90 Bullnose Rabbit Plane  This # 90 is in excellent condition.  It has seen little use.  American made.  Clean and Nice.

Stanley # 90  Bullnose Rabbet Plane    This is a very nice example.  The cutter still has plenty of  life left.  It is a US made model.  The #90 is 1" wide and a very useful style plane specially the bull nose feature when you remove the top half and use it as a chisel plane in corners and tight areas.  These planes are prone to damage, and need to be looked over prior to buying.  The blade adjuster can be stripped, and if the cutter is over tightened the cap, or "bridge can be cracked.  That is not the case in any of the ones I have offered here.

Stanley # 90A Bullnose Rabbet Plane  Want one but do not like the price of the boxed example.  Here you go.  The plane is very nice with some losses to the nickel finish as one would expect.  The sole and throat are very nice.  The cutter is full length with the original grind and marked 90A.  So is the tail nut on the adjuster.  The cap is marked Made in the USA.  I have included a number of pics showing just how nice this plane is.  The 90A is one of the rarest and hardest to find of all Stanley planes and this is an opportunity !!  Recommended for the discerning collector!! 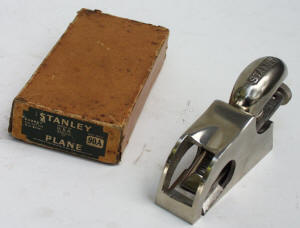 Stanley # 90A Bullnose Rabbit Plane w/ Original Box  Only of handful of these planes are known, and just a couple have ever appeared in the box.  This Stanley 90A rabbit Plane has been sitting on a shelf in 2 collections for close to 30 years and this is the first time it has come to market in all that time.  The original collector bought it from Roger Smith back in the late 70's.    Each of the last 2 collectors thought enough of it to die with it in their possession, if not their hands, and now is your chance, as the current consignor is not as attached as they were.

The plane itself is mint and shows no signs of ever having been used.  The nickel is 100% and bright.  The cutter is full length with the original grind.  There is no signs of wear on the tail piece handle.  Simply put it was never used.

The box does show some age along the edges and corners.  They have been reinforced from the inside, and it looks pretty good now, and is stable.  The Sweet Heart label on the end is near 100% and nice.  The edges of the inner box are split along the bottom and will need attention if it is handled much.

This is one of the rarest and hardest to find of all Stanley planes.  Very few have been offered over the years and none in cleaner unused condition that I have ever seen.  I know of only two others that have been sold in their original boxes and both bought more than I am listing this one for.

Stanley #90 Bullnose Rabbit Plane in Box    This # 90 Rabbit plane is in like new condition.  It is one of the last American made versions.  Nice.  You will like it.

Stanley #90 Rabbit Plane in Box    This one is earlier that the above one, and is from the 30"s or so.  It has seen little if any use and is minty nice condition.  The Box has been taped.   You will like it.

Stanley # 90 Bull Nose 1" Block Plane  Nice. Made in USA model that has seen some use and is still in great condition. My camera highlights the color and amount of the rust seen on the inside of the top. Clean it up a bit and go. 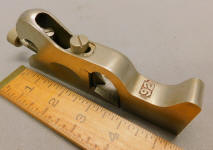 Stanley # 92 Bullnose Rabbet Plane The #92 Bullnose Rabbit is a very popular plane Stanley first introduced this model in 1902 and there is still a version being made in England . This is a USA model.   The 3/4" wide cutter shown is near full length. The nickel is 95% or better.  No other problems. A nice plane in nice condition.

Stanley # 92 Cabinet Makers 3/4" Wide Rabbet / Bullnose Plane   There is nearly an 1" of cutter left, it is marked USA and other than some minor nickel loss this #92  is in very nice condition overall and damage free.  This is the narrow version of Stanley's 90 series of rabbet planes and is just under 5 1/2" long overall and has an 3/4" wide cutter.  Care must be taken when buying these planes as there are a myriad of small things that can go wrong, be broken, or damaged, and these defects are often missed by the uninitiated or inexperienced buyer.  This one has none of those telltale problems with chips, casting breaks, or stripped adjusters.  The previous owner did stamp a ID # up on the nose but this hardly detracts from an otherwise near mint plane.  It is Nice!

Stanley # 92 Bullnose Rabbet Plane The #92 Bullnose Rabbit is a very popular plane Stanley first introduced in 1902.   The 3/4" wide cutter shown is near full length. The nickel is 90% or better.  No other problems. Another nice plane in nice condition.

Stanley # 93  Rabbet / Dado Plane    This USA made example of one of Stanley's popular 90 series rabbet and bullnose dado planes is in fine condition.   It is not a post 1980 English model which many consider a lesser product.  The throat is good.  The cutter is near full length. The button on the nose has a cosmetic dent.   Very nice!!

Stanley # 93  Bull Nose Rabbet / Dado Plane   English.  NOS / Never Used.  Good cutter. Nice throat.   Ready to go to work.  This is not one of the current remakes Stanley is currently putting out and calling sweethearts.  It has a few years on it and is a bit more "vintage".

Stanley # 93 Bull Nose Rabbet / Dado Plane  Good cutter. Nice throat. Dull finish.  It looks like a Cadmium finish rather than poor nickel, and so I am thinking WWII.     Ready to go to work.

Stanley 94 Bull Nose Rabbet Plane   This is the largest size in the 90 series of planes Stanley issued.  It is a dog finish wise, but has no structural problems and a full length cutter.  Good throat.  No other issues.  Clean it up and put it back to use.

Stanley # 80 & 90 Steel Cased Rabbet Planes  The same owner owned both of these and stamped them with his name.  They are also both marked with the proper date and Stanley stamp.  The owner saw fit to open the throats on both the same amount as was very common with these planes.  The lighter one on the right is the #90 with the spur.  The 80 on the left does not have one.  Both are pretty nice noting some minor chips!!

Stanley # 98 & 99 Sweetheart Era Side Rabbet Planes  Both are very nice with depth stop and nice cutters.  A good pair of users.

Stanley # 79 Double Side Rabbet Plane   The plane is very nice.  Japanned versions like this date from the WWII era.

BACK to Stanley Archive

This is just a sample of the many antique tools & planes we have sold.
Click link to see other Sales Archive Pages on this Site.

We Buy Quality Antique Tools
Contact Us at AntiqBuyer@gmail.com