This is just a sample of the many antique & collectible tools we have sold.
Click link to see other Sales Archive Pages on this Site.

Special Note Concerning Prices Seen Below:
Most prices seen reflect actual sale results from this website.
Prices seen span a long period of time and may not reflect current values.  Some are selling for more, many now sell for less.
On some pieces you will see no price, or a price range, with or without an explanation.  The reasons for that are discussed on the FAQ page. Stanley # 78 Duplex Rabbet & Fillister Plane in Sweetheart Box   Complete.  Shows some signs of use. No issues.  Ready to go back to work. Stanley # 65 Low Angle Block Plane in Original Box  A nice later example.  No indication it was ever used. Stanley # 79 Side Rabbet Plane    It does not look like it was ever used.  Nice. Stanley #4 Smooth Plane in Original Box A type 18 made just after WWII.  Looks to have been used once or twice and then put up on the shelf for the next 65 - 70 years.  Original box w/ missing label.  95% or more of the original japanning.  Good wood.  No issues.  Tuned up and ready to go. Stanley 42 X Saw Set  No need for rebuilding, adding springs, or other such nonsense that makes used ones sell for over 100 on Ebay.   As new, and Ready. Stanley 42 SS Saw Set  Like new in the box.  This was Stanley's later improved model.  No need for rebuilding, replacing springs, or other. Nice. Stanley # 71P Router in Box  A nice example.  No indication it was ever used.  Complete w/ 3 cutters and guide.

Stanley # 18 Knuckle Joint Block Plane in Original Box  All this plane needs is the shop dust wiped off and an ever so light cleaning of the sides to be in near mint condition.  The japanning is near flawless and the sole is bright and shiny.  The throat is nice as well.  The box has a weak corner that can be fixed easily.  I believe it dates from the late 30's.  You will not be disappointed.  A tough plane to find in the box and in this condition.

Millers Falls # 07 Rabbit Block Plane (Stanley # 140) in Original Box  The japanning on this 07 / 140  block plane is near flawless and the sole is bright and shiny.  The throat is nice as well.  The box is nice.   You will not be disappointed.  A tough plane to find in the box and in this condition. Stanley # 3 C Corrugated Smooth Plane  This Stanley #3 C corrugated smooth plane is in  like new never used condition.  It looks to be a 60's era plane with its dark stained handles.   These planes make for great users at a fraction of the price being charged for new planes of far lesser quality.  They have copied the idea well enough, but the execution and prices are  - - - - -

Stanley #3 Type 13 Sweet Heart Era Smooth Plane in Box This Type13 is in super condition overall and exhibits just minor traces of pitting on the side from box dampness.  This would easily lap out, or can be ignored as it is not objectionable.  The decal on the handle is near perfect and looks great.  The box is only fair with taped or torn corners and a weak top.  Tough to find these days!

Stanley #5 Type 18 Jack Plane in Box  This is a really nice plane that is in pristine condition, and shows no evidence of ever having been used.  The finish on both the body and the wood is flawless.  It is a type 18 in every respect.  The box has the notched rectangle logo on the label which indicates that this plane was made in the late 40's.  The box has weak corners, a good label and is pretty nice overall.  Nothing here that one could find fault with.  Own a piece of history from an era when Stanley really cared about what they put out for the customer.

Stanley #7 Jointer Plane in Box  This is a really nice plane.  The overall condition of this super jointer plane is superb and I doubt it was ever used.  It is a type 12, and the box has the sweetheart logo on the label which indicates that this plane was left over and put into a new run of boxes in the following year.  This would date it right around 1920.  The box has one torn corner, but is otherwise very nice as well.

Stanley #71 Router Plane in Box This is a sweetheart era issue router plane and appears to have seen little if any use.  The three cutters are here, as is the depth stop and adjuster.  The nickel is near 100%.  A nice one and useful for cleaning out dados and such in a variety of application.  Who wants to hear that electric thing humming along at 25,000 rpm's when this will do it and you get a completely different sense of satisfaction when done.

Type 16 Stanley 45 Combination Plane  This Type16 Stanley #45 is as close to mint as it could be, and only exhibits ever so minor box spots of rust on the rods which will clean. The body is virtually flawless, and it appears that it was never used.  It has the original instruction booklet, the screwdriver, both sets of rods, the cam, spurs, and all the depth stops that you will ever need. The cutters in their Sweetheart marked box are perfect.   The box is very nice also, with just minor wear at the corners, and some scuffs here and there.  Use it proudly, or put it up on the top shelf to further appreciate in this growing market, your choice.

Stanley 55 Combination Plane This is a really nice example that has seen little use and exhibits just typical sshelf wear from sitting idle for so long.  The box corners have been reinforced and it is solid again.  I saw this touted as a bonus on eBay a few years ago, and that example then soared to a world record price for a 55, something like 2 grand, and it had so much tape on it you could hardly see the box.  I guess that is what makes auctions exciting, anyway, here is your chance to get one just as nice for a lot less.

Stanley #42X Sawset in Original Box  As nice as one could ask for. Stanley # 9 1/2  Block Plane in Original Box  This super nice example does not look to have ever been used and is ready to be put back into service.   None Nicer

Stanley #100 Block Plane in Box  There will be no complaints about the condition of this one as it is like brand new, and the box is very nice as well.  The cutter has the notched rectangle logo and the paint is like new and original.  These are great for final fitting of small parts and final finish work, and that little palm rest is a nice added feature.  Everyone should have at least a couple!

Stanley # 6 Fore Plane in Original Box   This # 6 Stanley fore plane looks to have never been used.   It is minty nice.  I believe it is a Type 19 from just after WWII.   It is in a fold out cardboard box. Please note, I have a supply of NOS cutters for Stanley 90 series rabbit planes They are $20.00 each.  Inquire.

Stanley # 95 Edge Trimming Block Plane w/ Original Box  These are an interesting plane that Stanley first introduced back in 1911.   This is an earlier version that dates from just after that and during the era of the earliest sweetheart logo on the cutter.  The box looks to be from the teens and before they used the Sweetheart logo there.

It has seen little to no use, and has just some light shelf rust that will easily clean.  Look at the condition of the decal on the frame.  The box needs a bit of straightening up, but is all there.   A nice plane in exceptional condition. Stanley #6 C  Fore Plane in Original Box  The plane is mint.  The box has seen better days.   It is ready to go back to work.  A Nice One!! Stanley #5 C Corrugated Jack Plane w/ Original Box  This #5C is in like new condition.  It has great wood. It appears to be a type 16 dating it from just before WWII.   A very nice example. 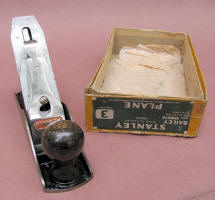 Stanley Type 19 # 3 Smooth Plane in Original Box   This plane looks to be unused.  It has some staining from the box, but is not pitted or in any way damaged.  The box shows normal wear and tear after 60 some years.  A nice example..

Stanley # 78 Duplex Rabbit Plane in Original Box  The #78 is Stanley's best known and most popular rebating plane.  It is a very versatile plane and a favorite with users.  This is a later English model.  It is all complete and nice.  The box has been taped on the outside. 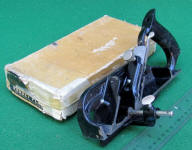 Stanley # 78 Duplex Rabbit Plane in Original Box  Stanley's best known and most popular rabbet plane.  It is a very versatile plane and a favorite with users w/ its bullnose feature.   It is complete and nice.  The box has been taped on the outside.

Stanley # 90 Bullnose Rabbet Plane in Box  American made, and like new.  It looks like the previous owner tried it once, and put it back in the box to sit for the next 40 years or so.

Stanley # 100 1/2 Round Bottom Tailed Block Plane in Original Box  These interesting little block planes were used by pattern maker and instrument makers to smooth out radiuses in their work.  This would be a type 2 with the red cap, but from the box assume it is pre WWII.  The condition is like new and this looks to have seen little use.   Nice!! Stanley # 71 Router Plane   This Stanley router plane is virtually unused and a fine example. It has 3 cutters.   Ready to go back to work. Stanley # 15 Block Plane in Original Box  The japanning on this 7" block plane is near flawless and the sole is bright and shiny.  The throat is nice as well.  The box is only fair, but did a great job protecting this versatile and popular little plane. I believe it dates from the late 30's.  You will not be disappointed.  A tough plane to find in the box and in this condition.

Stanley #82 Scraper Plane in Box  This super condition scraper was made after 1930 as evidenced by the logo on the cutter and the spring feature that was patented in 1933.  It is mint, and the box is as well.  The knob looks liked stained hardwood, but he handle sure looks like Rosewood or some other exotic like that..  It has both cutters as well.  Very Nice!!

BACK to Stanley Archive

This is just a sample of the many antiques & collectible tools we have sold.
Click link to see other Sales Archive Pages on this Site.